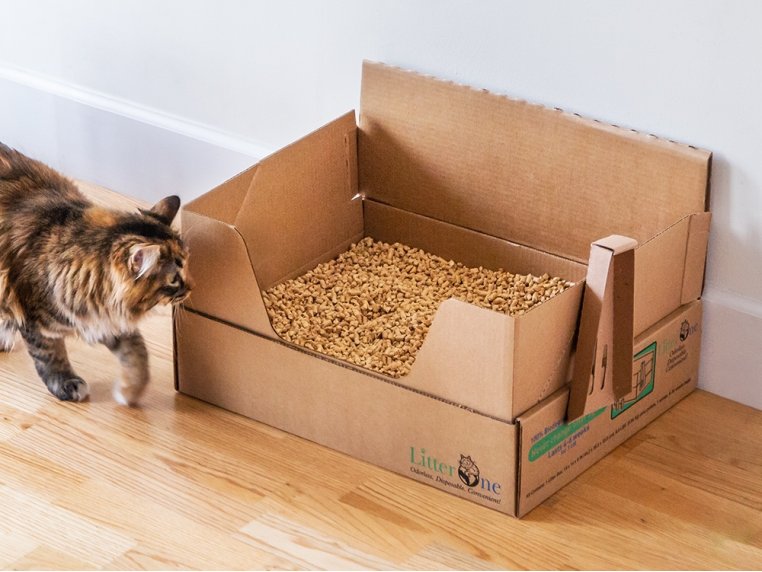 This question is quite popular among cat lovers.

Baking soda is effective in keeping the air around litter boxes fresh, cat lovers still worry about the safety of this method.

Is it okay to put baking soda in cat’s litter boxes? The answer is yes, baking soda will bring no harm to you or your cat. It is completely safe. Baking soda helps neutralize the bad odours that are emitted from litter boxes.

In fact, the only downside associated with the use of baking soda is that you will still have to clean it up with water from time to time.

If you own cats, and a litter box, then you know how bad litters can smell. If you have an overbearing caretaker, you may even lose your home because of the unpleasant smell.

Yes, you can wash the litter box every once in a while, but this will not provide a permanent solution.

This is the primary reason cat lovers began  searching for a means of controlling bad odors emitted from their cats’ litter box.

Baking soda is not the only means through which the air around litter boxes can be kept fresh. However,all other means of cleaning litter boxes include manual labor.

This is why we all want baking soda to work out. In the following sections of this article, we will explain why baking soda is okay in detailed points.

The chemists among us know that baking soda is better known as Sodium Bicarbonate. Baking soda is a chemical compound which consists of sodium, hydrogen, and carbon combined in varying amounts.

The result of this mixture is not in any way hazardous. This is the main reason why it can be used in a cat’s litter box.

In fact, baking soda is used for multiple applications within the home. This includes, removing stains such as dark imprints, unclogging channels, and freshening up rugs.

Baking soda has been in use within our homes for some time now, and there is no record of it causing any harm to anyone. It is even used to ease the pain of people with stomach upset.

Bicarbonate of Soda vs. Baking Soda

Baking soda is a rising agent – when it is added to certain foods, it will cause them to rise. To instigate the leavening action of baking soda, you will need a little moisture, and an acidic substance.

Bicarbonate of soda or baking powder is often confused with baking soda. These two are two very different substances.

Baking powder is an acidic form of baking soda. The acidic element in baking powder makes it unable to to neutralize acidic substances like cat urine.

The Danger of Excessive Supply

This are the effects that made most cat lovers abandon the entire idea. In the following sections, we will discuss the possible effects of using an excessive amount of baking soda.

Cats love to dig, if you don’t know this, then you are not a very observant cat parent. Litter boxes can be very dusty, and when your cat digs, the end result will be a very dusty room.

Adding an excessive amount of baking soda to your cats litter box will increase the amount of dust. Baking soda is made up of finely grained particles, these particles can easily become airborne.

You do not have to add a lot of baking soda to the litter box in order for bad odors to be neutralized. Use minor amounts of baking soda, this will circulate and absorb the urine of your cat.

This is the most complex property of baking soda. It is the primary reason why cat owners argue that baking soda is not effective.

Baking soda neutralizes bad odors, but when it is present in large amounts in litter boxes, it will encourage the same bad odor.

Why? The reason behind this strange phenomenon can only be explained using the scientific term potential difference.

Potential difference is by far the most important factor you need to consider as far as odors are concerned.

The potential difference of baking soda is 8.3, while the pH of cats urine is about 6 to 6.6 depending on the health status of the cat.

When baking soda is combined with this urine, the potential difference of the mixture will rise. If this rise ends at a pH of 7, you will have a neutral litter box – an odorless litter box.

However, if it exceeds 7, you will have something else on your hands. The pH of ammonia is 8.0.

If an excessive amount of baking soda is added to the cat’s litter box, you will have an eye – watering stench in the air after a couple of hours. Excessive baking soda leads to more bad odors.

Yes! You heard it here first, the same baking soda that you have used to keep your fridge smelling nice, and fresh, can lead to health problems.

This only happens when baking soda is added in excessive amounts to litter boxes.

In the previous pointer, we explained how ammonia can be created in a litter box.

However, we didn’t mention that besides the offensive odor of ammonia, the gas also causes respiratory defects.

Ammonia is detrimental to the respiratory health of cats. Your cat isn’t the only one at risk – ammonia is known to cause sinus problems, eye irritation, and upper airway irritation among humans.

In addition, when humans are exposed to ammonia for a long period of time, they become prone to lung cancer.

This is why it is important that you maintain a balance in the amount of baking soda you add to your cat’s litter box.

We mentioned earlier that too much of anything is bad, and that an excessive amount of baking soda in your cat’s litter box will have seriously negative effects.

This is why the amount of baking soda that is permitted in a cat’s litter box is extremely small.

If you get a commercial litter box, you won’t have to worry about adding baking soda, because most companies add baking soda to the mixture.

However, if it is a home-made litter box, or one that you just cleaned up, you will have to add the baking powder yourself.

When your kitty handles his business in the litter box, he will use the litter to cover it’s business.

By digging up the litter, it will indirectly mix the litter to control offensive odors. Make sure that you don’t use an excessive amount of baking powder. This will lead to dire consequences.

This is one of the major reasons for concern among cat lovers. They often ask if cats eat baking soda?, and what will happen if they do?

You don’t have to worry about your adult cats, they want nothing to do with baking soda.

However, the kittens who are still exploring may give baking soda a try from time to time. Baking soda has an unappealing salty taste. Eventually, your kitten will stop eating baking soda.

Ingested baking soda will have no negative effect on your cats. In fact, it will help them balance their acidic tummys. There is no need to worry about the ingestion of baking soda by your cat.

Baking soda is known for its odor cleansing abilities.

However, most cat lovers noticed that the same soda that achieved excellent results in their refrigerators worked negatively in their cat’s litter box.

This made a lot of cat parents abandon baking soda.

The problem is not that baking soda does not work, but that the measurement is often wrong, and this often leads to even worse odors.

It is okay to add baking soda to your cat’s litter box, but you have to add it in small amounts.